The court’s ruling came in an appeal by a high school teacher who was prosecuted for possession of child pornography. While performing systems maintenance, school technicians discovered illicit images of an underage female student on the teacher’s school-issued laptop computer. The school turned the photos over to police, who then searched the teacher’s computer without a warrant.

A trial court ruled that the police had obtained the images from the laptop in violation of Section 8 of the Canadian Charter of Rights and Freedoms, which guarantees the right of everyone in Canada to be secure against unreasonable search or seizure. For this reason, the trial court held that none of the evidence obtained from the warrantless search could be used at trial. A summary conviction appeal court found that the authorities had not violated the defendant’s privacy rights. The Court of Appeal for Ontario set aside that decision, holding that some of the evidence obtained from the defendant’s workplace computer should have been excluded and some admitted. 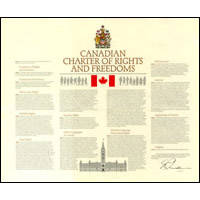 The Canadian Supreme Court allowed the defendant’s appeal from the determination that some of the seized evidence was admissible. It summarized its ruling as follows: